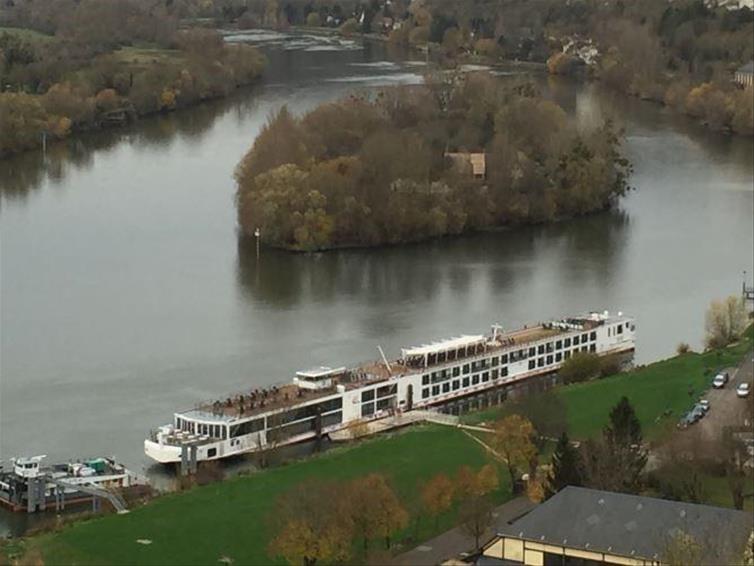 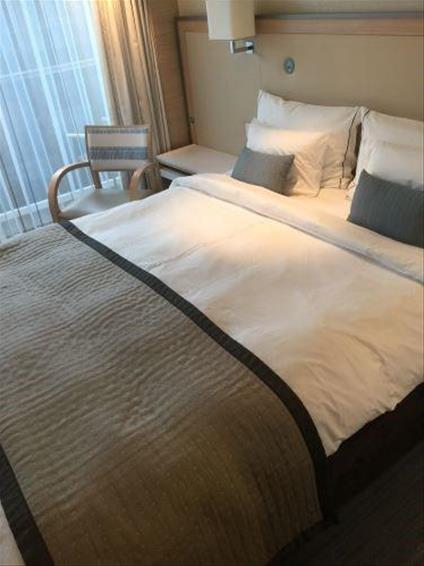 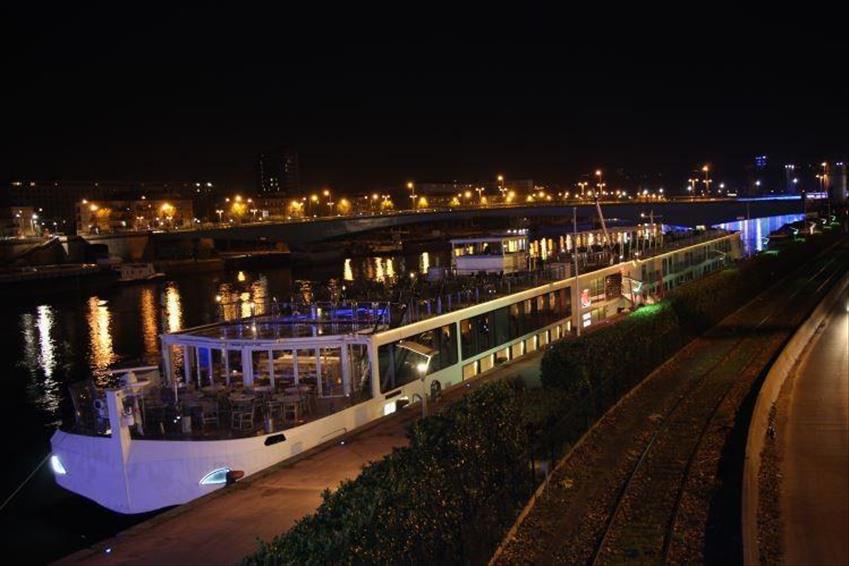 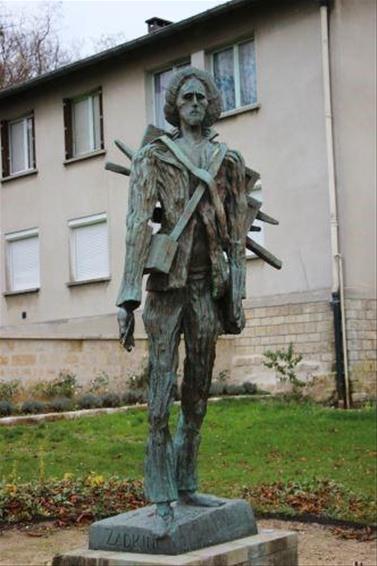 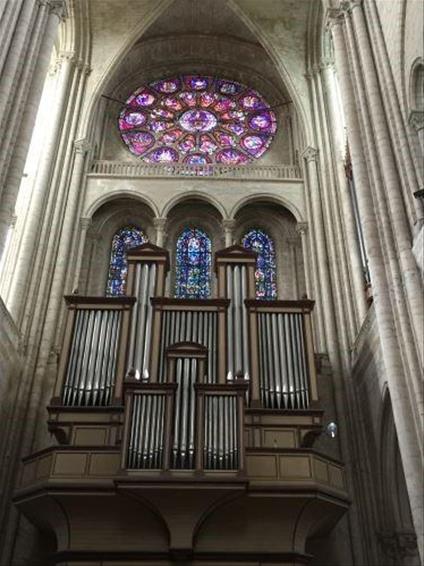 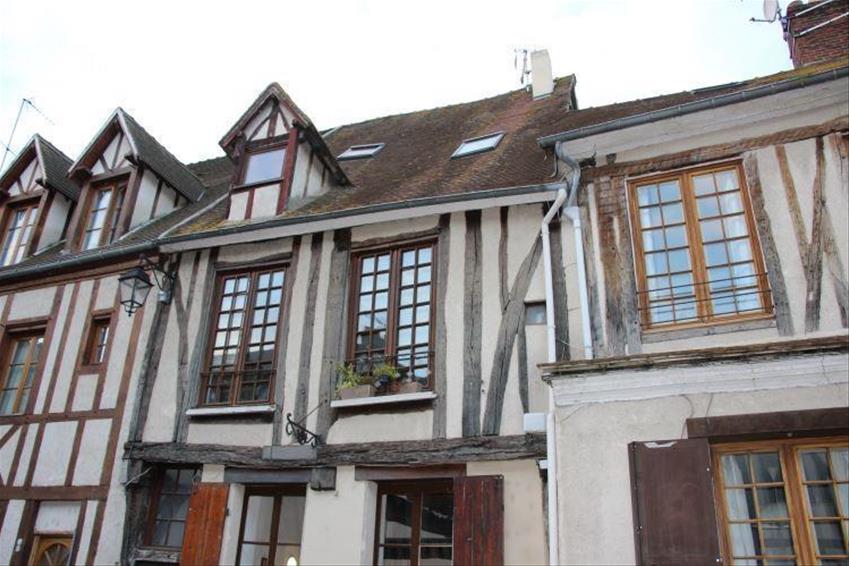 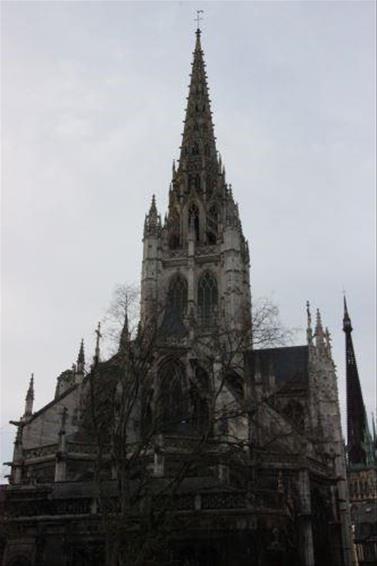 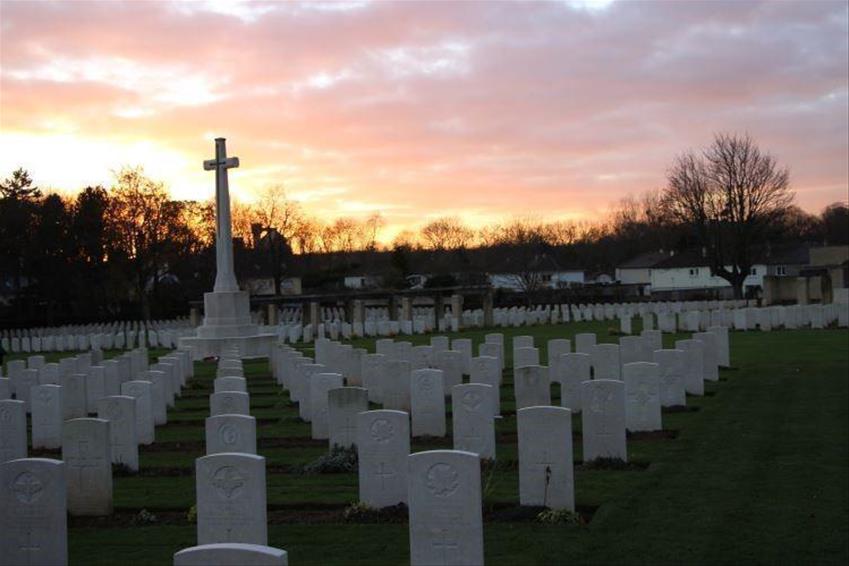 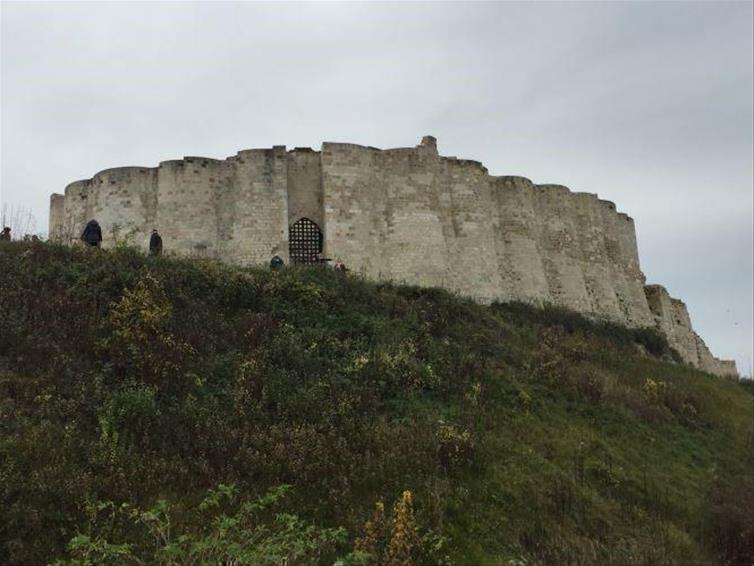 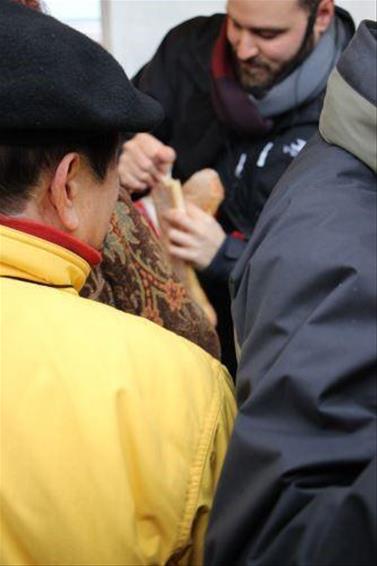 For the 2015 season, Viking introduced the long ships, however, the piers at the Eiffel Tower were unable to be completed in time, and so all cruises from Paris departed for an outer suburb on the Seine, Le Pecq. My first impressions of the Rinda, are the clean lines and bright wood of this 3 level vessel, all part of the Norwegian influence of the owners. No need for internal lights during the day. There was a small buffet lunch in the lounge leading on to the Aquavit Terrace, a feature on all the Viking long ships. Internally in the cabin, there is plenty of space in the cupboard to hang your clothes, and numerous drawers for those clothes not requiring hanging. There is also a safe in the cupboard, flat screen television, a King size double bed, and a more than adequate ensuite with L’Occitane toiletries as well as free Wi-Fi on-board the vessel.

The obligatory safety drill in the evening, followed by dinner in the restaurant. The first night's entertainment was a trio of Opera Singers performing various tunes either written by French composers, or songs about France. The night ended at 10.30pm, but the majority of guests had already departed for bed by then.

Due to the Parisian authorities making all museums free on Sundays, the programme director, Guillaume, had decided to rearrange some of the tours that were on offer on Day 7. I spent the day exploring areas of Paris on my own walking both sides of the Seine and the two small islands in the centre of Paris, Ile de la Cité and Ile Saint Louis. We returned to the vessel for the Captain’s welcome toast in the Lounge, and an introduction to other crew members. Whilst we were eating dinner, the Rinda moved upstream to prepare for the next day’s sailing. Post dinner, our programme director provided all the guests with a basic French lesson, and after that, we listened to Niko attempt to play a piano and sing cover versions.

This morning, we headed out to Auvers-sur-Oise, the city where Vincent Van Gogh painted over 70 paintings, including the famous Notre Dame D'Auvers. The Viking River cruises provide what they call “quiet boxes”. These are receivers with earpieces that let you hear what your tour guide is saying when you are not close to them. Having informative guides enhances the listening. Whilst we were visiting this town, the vessel sailed from Le Pecq to Mantes-la-Jolie, famous for its beautiful church. After looking in the church, we re-boarded the Rinda for lunch, and sailed down the Seine to our overnight stop in Vernon.

This town is famous for its collegial Notre Dame which was built between the 11th and 16th centuries largely in the Gothic style, with various contemporary stained-glass windows, the originals having had to be replaced after 2nd World War bombing raids. Around the church, are streets with lovely half-timber houses that largely originate from the 16th century. We had a local guide who also took us to a local butcher, where we tried boudin (French black sausage that is one of France’s oldest charcuterie preparations).

The morning commenced prior to breakfast, with the Rinda departing Vernon for Rouen. Rouen features a rich architectural heritage in a city where the centre is almost completely pedestrianised. There are half timbered houses and buildings that date from the 13th century, including the Cathédrale Notre Dame de Rouen and the Abbaye Saint-Ouen. Besides the splendour of its architecture, Rouen is renowned for many historic and literary characters including Richard the Lionheart, Joan of Arc and Gustave Flaubert. Our tour guide led us through narrow paths into hidden squares, and we finished the day with free time walking the streets of Rouen.

After breakfast, we boarded the buses for the Bayeux Tapestry, now on permanent public display in the city of Bayeux in Normandy, France. It tells the story of the Battle of Hastings; why William felt he had to invade, the preparations made for the crossing and the battle itself. Nearly 70 metres long and 50 centimetres tall, the story it tells was to have a huge impact on Medieval England. We then proceeded to the town of Arromanche-les-Bains, where the Allied troops had towed in a false harbour on the day of the D-day landings, of which remnants are still visible today.

After lunch, we travelled to Juno & Gold beaches, in Courseulles-sur-Mer to look at the Museum, some of the Nazi artillery gun positions, and walk on the beaches that took so many lives. We then travelled to The Bény-sur-Mer Canadian War Cemetery, which is a cemetery containing predominantly Canadian soldiers killed during the early stages of the Battle of Normandy. After we paid our respects there, we travelled to Pegasus Bridge, that was built in 1934, and crossed the Caen Canal, between Caen and Ouistreham, in Normandy, France. It was a major objective of the British airborne troops during Operation Deadstick, in the opening minutes of the Allied invasion of Normandy on 6 June 1944 during the Second World War. A unit of Glider infantry of the British 6th Airborne Division was to land, take the bridges intact, and hold them until relieved.

The original bridge has now been relocated a few metres down the road in the grounds of the Pegasus Museum. Also there is a replica of the glider used during the operation. After this we than travelled to Ranville War Cemetery, containing the graves of two Australian pilots flying for the RAF, who were killed during the early stages of the Battle of Normandy. Again, we paid our respects to the fallen, and spent the bus journey back to Rouen contemplating the enormity of what we had seen today.

I awoke to find us leaving Rouen for Les Andelys, as we travelled upstream, back towards Paris. The morning was spent looking at the sunrise and the views from the vessel. After lunch, we arrived at Les Andelys. In the late 12th century, Richard the Lionheart, King of England, but also, thanks to his Plantagenet roots, Duke of Normandy, ordered the construction of a massive new castle here, Chateau Gaillard, to guard his Norman possessions and the nearby Norman capital of Rouen, from the powerful king of France, Philippe Auguste.

I awoke to find us back in Le Pecq, and we joined head chef on the Rinda, Ricky, for a tour of the Conflans farmers market. There, Ricky had organised for us tastings of Normandy Oysters, freshly baked baguettes, Pates, Saucisson (variety of thick, dry cured sausage that originates in France), and numerous cheeses. In the afternoon, I hastily organised some of the agents on a quickly organised tour of my own, as we travelled by train into Paris. After dinner back on the Rinda, some headed out for a night tour of Paris, whilst I headed for one last evening with Peter the bartender.

Enough time to pack up clothes, have breakfast and say farewell, before the surprise of a private transfer back to Paris for my extra night.