5 Active Wildlife Adventures in BC

It’s one thing to spot a whale from a Zodiac with a group of camera-clad travellers. It’s another to paddle at eye level with a surfacing orca—just you, your guide, a friend or two, and the sound of the creature blowing air. Both are exciting, but if you want a more intimate thrill, you might be looking for a more active adventure. Here are a few great options, with tips on where and when to go in British Columbia…

WALK WITH GRIZZLIES IN THE CARIBOO

For total immersion and connection with nature, perhaps you’d like to walk with the grizzlies! For a few weeks in September each year, just two intrepid souls join guide and longtime grizzly aficionado Gary Zorn for a Walk with the Grizzlies as he treads lightly in chest-waders up a remote salmon spawning river at the base of the Cariboo Mountains. These solitary beasts are among Earth’s largest predators, and Zorn sheds light on what makes them tick—body language, hierarchy, and habits. Commanding, respectful, witty, and above all, calm, Zorn shows guests how to meet grizzlies on the bears’ terms and on their turf.

SNORKEL WITH SALMON IN CAMPBELL RIVER

First, picture a million salmon fighting their way from the sea upriver to spawn at their birthplace. Now picture you snorkelling alongside. Insane! Pull on a wetsuit and mask, slip into the 15-degree-Celsius (60-degree-Farenheit) crystal-clear water, and prepare to ride the current of the shallow rapids with thousands of salmon ranging from 5 to 90 lbs (2 to 41 kg). The action takes place July to October on the Quinsam River, a tributary of Campbell River. The city of Campbell River, aptly named “Salmon Capital of the world,” is located on Vancouver Island’s east coast.

TAKE A RIDING ADVENTURE WITH THE GIRLS IN THE CHILCOTIN

Journeying deep into the backcountry gets you closest to wild animals in their natural environment. Doing it on horseback? The same thing—without all the sweat. Ride to the planet’s most unspoiled nooks and crannies like the snow-capped peaks and placid lakes of the Chilcotin Mountains, near Gold Bridge in southwest BC.

Floatplane it in from Vancouver to your basecamp: a little prospector-style cabin at the edge of the forest, surrounded by blue lupin and white lilies. Then let your trusty steed lead you for eight days along traditional game trails high up into the glacier-carved alpine tundra. Clocking five to eight daily hours in the saddle, look out for resident black bear, grizzlies, moose, deer, bighorn sheep, mountain goats, eagles, perhaps even a stealthy cougar or wolf. 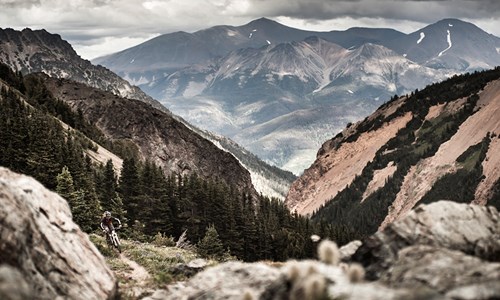 SPEND THE NIGHT WITH DOLPHINS IN VANCOUVER

If you want to commune with the creatures of the deep, but keep it urban, consider a sleepover at the Vancouver Aquarium. Spend the night in the hushed quiet after the place has shut down for the day, next to one of the marine displays, drifting off to sleep while dolphins, jellyfish, sharks, and sea lions glide and frolic above. Offered nine times a year, the nights are themed; for example, “tropical paradises.” Invite a group of friends, make it an adults-only evening, take the family, or bring your Valentine to “Hugs and Fishes” for an extra-special night around Valentine’s Day.

KAYAK WITH WHALES OFF VANCOUVER ISLAND

Magical. That sums up gliding alongside a nine-m (29-ft) orca as its dorsal fin crests the water. Get up close and personal with these magnificent creatures on a paddling adventure. Paddle around Vancouver Island’s rocky northeast coast, home to some 300 of the dolphin family’s largest member live here: the most sizeable population on the planet. But wait, there’s more! You’re likely to spot giant humpbacks, otters, sea lions, acrobatic Pacific white-sided dolphins, and foraging grizzlies as well! 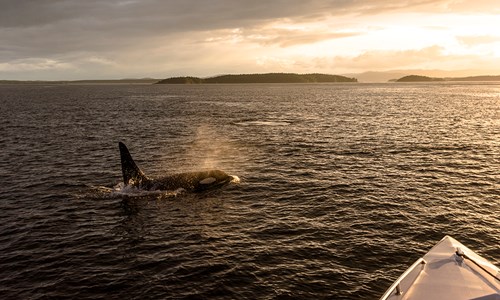 The coastline of British Columbia provides opportunities to observe whales and other marine life in their natural environment so don’t forget to bring your binoculars and check with the locals about guidelines to enjoy watching marine animals safely and responsibly. When you are hiking, biking, and camping in BC, you are in bear habitat. Make sure you are informed, prepared, and aware at all times. Be sure to keep your distance from wildlife—30 m (98 ft) minimum, and even further, at least 100 m (328 ft), from predators such as bears.

To plan your wild getaway in British Columbia, get in touch with your local Travel Counsellor today! Or if you need more inspiration, check out our Canada Destination Guide.