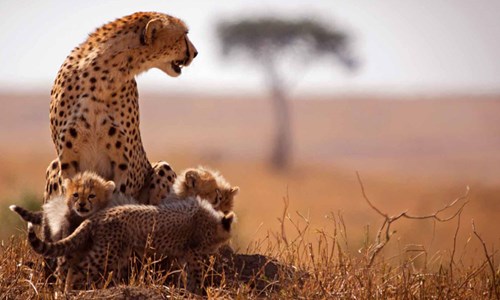 Located on the coast of East Africa, Tanzania is where the bewildered wildlife beautifully collides with human culture. From the exotic tropical nirvana of Zanzibar, to the natural exuberance of Serengeti, Tanzania is the ultimate travel experience. A must do for all travellers is a safari through the wilderness of Serengeti National Park, Ngorongoro Crater and Selous Game Reserve. Immerse yourself in the habitats of various exotic wildlife including lions, cheetahs, leopards and jackals.

The incredible landscape of the Ngorongoro Crater is a mix of grasslands, swamps, lakes and forest. The prehistoric crater is home to hippos, elephants, flamingos, and, the last of the endangered black rhino. The largest and most protected wildlife reserve, the Selous Game Reserve in Southeastern Tanzania inhabits elephants, buffalo, crocodiles and tropical bird species. Embark on a safari cruise down the Rufiji River to get up close to the creatures that dwell beneath in the water.

Dive beneath the surface, and explore the marine life along Tanzania’s islands and coastline. Zanzibar is well known for its white sandy beaches that fringe crystal blue waters, perfect for snorkelling and swimming. Explore the heritage listed old quarters, which echoes elements of European, African and Arabic influences. The Stone Town’s Ngome Kongwe, ‘Old Fort’ is an interesting visit to learn its history of defending the Busaidi Omani Arabs from the Portuguese in 1698. In the morning, wander through the Estella markets to try the variety of fresh fruit, vegetables and fish on sale, as well as sample the stands that sell goods such as jewellery and fabric.

Zanzibar’s neighbouring islands are also worth a visit. The tiny island of Mnemba is a tropical paradise and is the ultimate destination for snorkelling and diving. For an ‘off the beaten track’ experience, head to Pemba, a rather undiscovered island that boasts some of the best diving along the East African coast, with coral reefs, lagoons and exotic fish.

Keep the adventure going with Tanzania’s many hiking tracks. Explore Mt Kilimanjaro Park and if you’re game enough, climb Africa’s highest mountain at a whopping 5896 metres high. Kilimanjaro is not only one of the world’s oldest volcanoes, but is the earth’s highest freestanding mountain. Travellers do not need ropes or advanced climbing skills but must be prepared for a challenging trek to the top.

Learn about the history of the island of Kilwa Kisiwani in Tanzania’s south. The island was once a thriving port, during the gold trade in the Eleventh century. Kilwa Kisiwani connected the gold mines in Zimbabwe with China, India and Persia. Today, it is a fishing village, but also, holds testament to East Africa’s history with its surviving remains of the magnificent Great Mosque and the Palace of Husuni Kubwa. UNESCO declared the island a world heritage site in 1981.

If you're interested in taking a holiday to Tanzania, get in touch with your Travel Counsellor today to plan your tailor-made holiday.