Iceland: The Land of Fire & Ice 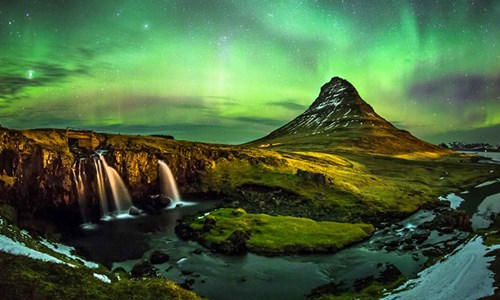 Known as The Land of Fire and Ice, Iceland is one of the most diverse landmasses in the world, having been formed by eruptions a mere 18 million years ago and since shaped by the relentless forces of Mother Nature. It is a land of raw contrast, home to both glaciers and volcanoes, to days of endless light in the summer time and a blanket of darkness in the winter. Iceland’s isolation and extreme climate has created a unique society and culture that is strongly rooted in custom and tradition. With a population of just over 330,000, the awe-inspiring nature and epic landscapes remain for the most part, untouched.

Known for its Viking history, the Snaefellsjokull National Park is a wonder to be explored, where glacier lagoons and cascading waterfalls can be admired. For a more challenging trek, hike the remote Hornstrandir landscape and be taken up high mountain peaks and admire seas of fluffy clouds. Also popular for hiking and biking is the lavender meadows of Skaftafell National Park, and Jökulsárgljúfur National Park, that is home to Europe’s most powerful and captivating waterfall, Dettifoss. Step off land, and explore the seas, by floating in the sapphire clear water between the rift that separates the tectonic plates of Eurasia and North America at Silfra, or, go searching for and get up close to wild minke and humpback whales. In the southwest of Iceland, trvellers can find Gullfoss, a spectacular waterfall in the untouched beauty of the Hvita’s canyon.

Witness the Aurora Borealis light up the night sky as they dance for over eight months of the year (August – April) in the northern country. Destinations to go hunting for the lights are in the Westfjords region, and the geothermal ranges of Landmannalaugar. If you are sticking closer to the capital, the Northern Lights can still be seen in Reykjavik. Take a 15-minute drive to Bessastaoir in Alftanes town, and there you will find a large a bay. Here, the view of the lights is mesmerizing, and has a magical reflection in the sea.

Reykjavik, the capital of Iceland is a charming and culture rich city. Wander along the harbour front and take in the contrasting landscapes of the colourful historic buildings to one side, and the sweeping views of Lake Tjörnin with the backdrop of mountain peaks. Visit the Viking maritime museum to hear the stories of the Iceland’s maritime past, climb the tower at Hallgrimskirkja - the city’s well-known church, and immerse yourself in one of the many bubbling thermal baths. For a quintessential Icelandic experience, bathe in the geothermal waters of the Blue Lagoon for the ultimate relaxation experience with stunning scenic surroundings.

If you're interested in taking a holiday to Iceland, get in touch with your Travel Counsellor today to plan your tailor-made holiday.