The Best Tacos in L.A. 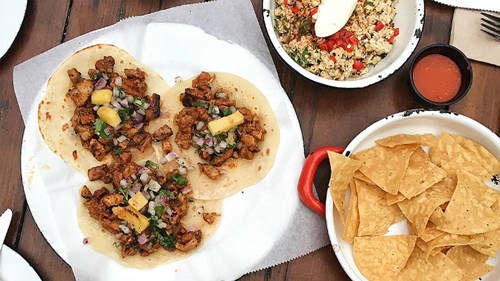 The taco is the perfect food, often made with a nutritious whole grain corn tortilla base and an incredible range of regional ingredients and unique textures. There’s no better city in the United States to enjoy tacos than Los Angeles - the taco motherland is just two and a half hours away, and L.A. has the second-largest population of Mexicans after Mexico City. The taco is finally getting the respect that it deserves, and is being taken as seriously as a good pasta. Read our guide to some of the best tacos in L.A., and discover this Mexican staple food’s vast nuances.

Hidalgo-style barbacoa de borrego - lamb roasted in pencas de maguey (agave leaves) – is one of the original Mexican breakfast tacos. It’s right up there with birria (goat, in Jalisco and Zacatecas) and carnitas (Michoacan) as a classic, regional Mexican breakfast taco choice. And while there are plenty of places around L.A. to eat barbacoa, Aqui es Texcoco has raised the bar with their barbacoa quesataco. Located in Commerce, this new San Diego transplant features a piece of oozy cheese that’s seared until crispy and then stuffed with some tender lamb. Other options include chicken, huitlacoche (Mexican corn truffle), mushrooms, zucchini flower or poblano pepper. Enjoy with a pint of mango pulque curadito, a pre-Spanish conquest Mexican boozy drink made from the fermented sap of the same agave that’s used to roast the lamb. Your breakfast paradigm will never be the same.

In April 2015, chef Ray Garcia opened B.S. Taqueria on 7th Street's thriving restaurant row. The casual space boasts a colorful, whimsical design by All the Bells & Whistles. Guests order at the counter, get a number and seat themselves. The full bar features cocktails by Michael Lay (Broken Spanish). Start with an order of the addictive lemon-pepper chicken chicharrones - chicken skins, chicken oysters, lemon and shishito. Tacos include chorizo and papas, bologna, lengua and a veggie option, calabacitas. Don’t miss the tres leches cake, with brown sugar meringue and macadamia nut.

It just so happens that the traditional French method to make duck confit shares almost the exact same traditional cooking technique as making Mexican pork carnitas (“almost” because the former is made in the oven and latter is made over a fire). Well, CaCao Mexicatessen in Eagle Rock realized this fun little fact and applied traditional carnitas seasonings to duck confit, and voila, their rock star duck carnitas taco was born. It’s as utterly delicious as it sounds, especially because CaCao prides themselves in their thin, handmade tortillas. These famed tacos de pato are topped with crisp radish matchsticks, pickled onions and avocado. Squeeze some lime and pair it with a glass of their chilled Mexican chenin blanc from the Valle de Guadalupe Baja California wine region, and you’ll have one of the best Mexican taco experiences in Los Angeles.

The tacos de coliflor at Colonia Taco Lounge feature airy, flaky and lightly-battered cauliflower florets that are drizzled with a little Mexican crema and vinegary caper salsa, and served on a chewy flour tortilla. Would you expect any less from the guy responsible for the iconic Guisados and Cook’s Tortas Mexican restaurants? Located in La Puente, about 15 miles east of Downtown L.A., Colonia is a true destination restaurant. It's certainly loungey enough to enjoy an entire evening - there are plenty of padded booths and a live music stage. Colonia features an impressive list of local craft beers on tap, which sometimes includes rare selections like Dogfish Head’s coveted 90-minute IPA, and a solid menu of strong cocktails like “A Fruit Cart Named Desire". 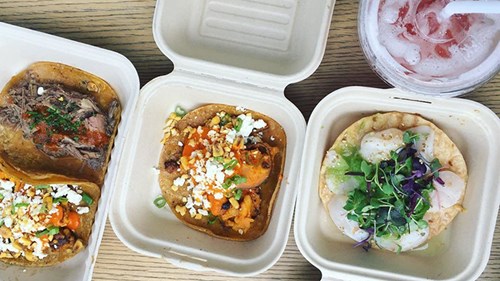 Every day except Tuesday, Chef Wes Avila parks his Guerrilla Tacos truck at hip coffee shops across the city, from the Arts District (Blue Bottle on Mondays, Blacktop on Fridays) to the Westside (Cognoscenti Culver City on Wednesdays, Blue Bottle Venice on Sundays). This farmers market fiend always gathers the best seasonal ingredients and serves them in tacos, tortas, tostadas, burritos and quesadillas. The only constant is his sweet potato taco with almond chile, crumbled feta, fried corn, and scallions. Beyond that, the menu shifts as inspiration strikes or as Avila travels. A trip to Puerto Vallarta resulted in delectable rolled crab tacos with chile guajillo, chipotle crema, and raw tomatillo chile. He’s also riffed on poke after visiting Hawaii and mines the shelves of Armenian markets in his home neighborhood of Glendale. The lines will only get longer when Avila's highly anticipated cookbook drops on October 10. 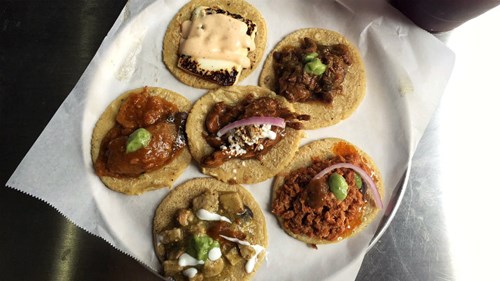 Opened in Boyle Heights in December 2010, Guisados has expanded to locations in Echo Park, Downtown L.A., West Hollywood and Burbank. Guisados is renowned for their homestyle braises, served on handmade corn tortillas that are made to order from the fresh ground masa next door at Carnitas Uruapan. The stews and masa are still made and delivered from the Boyle Heights location several times a day to ensure freshness and flavor in every bite. All tacos are priced at $2.95 each, except seafood options, which are $3.25. The menu includes steak picado, mole poblano, tinga de pollo, chicharron, chorizo, camarones (fajita-style shrimp), pescado (grilled white fish), and vegetarian options like calabacitas (squash, tomatoes, bell peppers, corn, onions) and the fiery Chiles Toreados - habanero, serrano, jalapeno and Thai chiles blistered together over high heat. Can't decide? The sampler plate features six mini-tacos - you can take the first six on the menu, or mix and match.

Handmade flour tortillas are extremely tough to find in Los Angeles. Only a small handful of places make them, compared to the dozens and dozens that make their corn tortillas by hand. For the most part, this is due to the sheer, painstaking difficulty of consistently making handmade flour tortillas in large amounts. Since you’re dealing with gluten, they are as hard to master as baking a good loaf of bread from scratch. But when it’s done correctly, a good handmade tortilla shares many similarities with an Indian naan and even Middle Eastern pita breads. Such is the case with the breakfast tacos at HomeState, the recently opened Tex-Mex restaurant in East Hollywood. Regardless of the filling you get - bacon, eggs, cheddar, potato, eggs with brisket or eggs with black beans – the thing to behold are the handmade flour tortillas. As it turns out, they are available to buy by the dozen and half dozen, so you can make your own epic homemade flour tortilla-based tacos at home too. 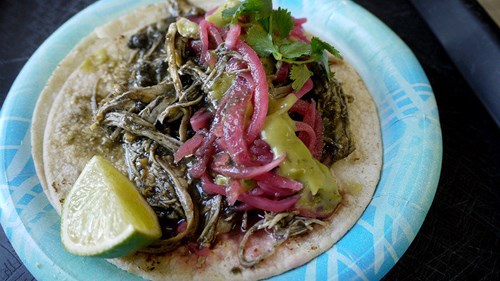 Located on the eastern edge of Mid-City, La Flor de Yucatan is one of L.A.’s most unique Mexican bakeries, cooking up authentic cuisine from the Yucatan peninsula since the late '60s. Each day, the Burgos family prepares a special plate of traditional delights such as chirmole (pork in beans and a chile and spice paste), and on the weekends there are regional tamales called vaporcitos and colados, and of course tacos with cochinita pibil (roasted, marinated pork) and relleno negro (turkey in a black recado). The bakery has limited seating, but it’s worth it to grab a table and enjoy some of L.A.'s best Mexican cuisine while it’s hot.

In the world of Mexican food ethnography, the origins of the taco árabe are highly disputed. In a nutshell, it’s a product of either the Iraqi or Lebanese immigrants that arrived in Puebla in the mid 1940s (hence the name árabe) and very similar to an al pastor preparation, where the flame-kissed, pork-wrapped trompo is shaved onto your tortilla. Except the tortilla here is a pan árabe, a truly unique toasted vessel that’s a hybrid of flour tortilla, pita bread and flatbread. Instead of the usual cilantro, onion and salsa, the traditional toppings for tacos árabes include briny, unpasteurized quesillo string cheese and jocoqué (cultured cream), both imported from Mexico by the owners at Los Originales Tacos Árabes de Puebla. It’s finished with a smoky, thick chipotle salsa and a fanned avocado.

No Los Angeles taco list can be complete without mentioning the simple, pocket-sized tacos de camarón at Mariscos Jalisco. The concept at this Boyle Heights mobile taco landmark is simple: ultra seasoned, crispy, fried and folded tacos are stuffed with chopped, plump shrimp and a secret combination of veggies, then smothered with a refreshing, oregano-scented tomato salsa and generous wedges of buttery, ripe avocado. Despite the mélange of ingredients, the tacos are light and addictive. We suspect that the secret lies in the shrimp-seasoned oil used to fry them - enough so, that you can’t have just one. (Or two or three, for that matter.) But don't take our word for it; if a belly full of fried shrimp goodness isn’t your thing, you can mix it up with one of their coctéles, which comes with a couple of freshly shucked oysters, the cheapest in town.