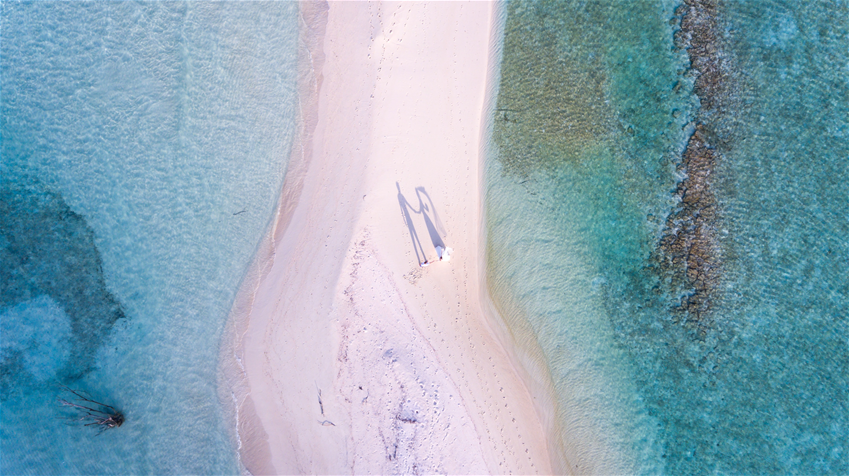 Can’t decide between a honeymoon in tropical paradise, or in the beautiful sun of the French Riviera? Why not have both - just a short flight from Australia?

With its tropical vibe and French sophistication, New Caledonia is paradise just over 3 hours flight time from Melbourne in the South Pacific. With white sand beaches, the world’s largest lagoon and second longest coral reef teeming with sea life, this idyllic destination is fast becoming a popular choice for wedding locations and honeymoon destinations out of Australia.

Many visitors from Australia make their first visit to the capital Noumea on a brief visit via cruise ship and assume that's all there is, but there is so much more to discover about New Caledonia that simply cannot be packed in to such a short pit stop of only a few hours.

In 1999 I worked for P&O on board the Fair Princess cruise ship (in the perfume shop!) and enjoyed regular weekly trips to Noumea, Lifou, Isle of Pines and Mare. During this time I developed a passion for New Cal, so much so that I ended up honeymooning there myself, treating my husband to island tours, snorkelling and too many French culinary delights, but also learning much more about about the local culture and economy. Away from the cruise port, be prepared to experience a spectacular, busy, bustling town in Noumea that is not reliant on tourism for survival as New Caledonia sits on one of the biggest Nickel deposits in the world. So the locals work hard, and know how to wind down in style...

The first thing you notice when flying in - apart from the brilliant turquoise blue lagoons - is that when you get to La Tontouta Airport, you have landed - in France. The tricolor flag is ubiquitous, signs are in French, and Customs officials are chatting away in French. Don’t be daunted though! All you need to do is attempt “Bon jour” in an Australian accent and they will soon switch to English.

If heading south to Noumea, be prepared to soak in some spectacular scenery as the road cuts through stunning hills (a little disconcerting driving on the other side of the road), before widening out to a decent sized freeway as you approach the city. It might seem large for a city of about 100,000 people, but many locals choose to live in the countryside and commute to work.

On settling in to the hotel during our honeymoon, we decided to explore the nearby Baie de Citron (Lemon Bay); after a short wander, we quickly plumped for La Barca where we were blown away by the tapas style bar and live music! French/Mediterranean bar style food abounds - pizza, pasta etc, and plenty of dishes with a Pacific twist, such as nachos with a tuna and tomato salsa. Another favourite in this strip is nearby Lemon Bay Cafe but there is plenty to choose from and it’s hard to go wrong.

We also took advantage of the dining close to the major hotels in the Anse Vata Beach area, which ranges from fine French cuisine (Le Roof - where the dolphins might also put on a show!) to Japanese to hotel restaurants, and a great gelati bar to finish off. There are also nice boutiques worth looking at all along the strip and under the Hilton Hotel complex, and the booking office for the Amedee Isle Lighthouse boat trip aboard the Mary D is located here.

The centre of town also has great bars and street food, where you can pick up crepes or a baguette on the go - we don’t realise in Australia just how good REAL French baguettes are! Because New Caledonia is still a protectorate of France, many varieties of food and wine are sourced from there and while you have an overwhelming feeling of being immersed in French culture, there is a strong indigenous Melanesian culture and Pacific influence too.

Service and hospitality is much more relaxed and friendly than in France, with English widely spoken in tourist areas and a strong Melanesian island vibe, and most venues have a casual outdoorsy feel; accommodation options run from self-contained five star resorts that in theory you never have to leave, right through to fully furnished apartment-style living where you can design your own independent holiday.

Some of the best things to see and do are:

Car tour of Noumea - especially if you are planning to explore the sights and sounds of the capital, a driving tour with a local guide is a good way to get your bearings. Noumea is surprisingly large and there are many different pockets and precincts where you’ll want to spend more time, including Anse Vata, Bay de Citron, the Latin Quarter, and more.

Day trip to Amedee Lighthouse - take a pleasant morning boat ride on the Mary D to Amedee Island, with a local Melanesian inspired lunch and cultural show included in the fare, as well as a glass bottomed boat ride over the coral reef; then doze off in a deck chair on the beach or go snorkelling on the reef, all in the shadow of the spectacular lighthouse - one of the tallest in the world, shipped out from France in pieces and assembled in 1865.

Day trip or stay at Ile de Pins (Isle of Pines) - take a domestic flight or high speed catamaran ferry and stay at one of several resorts, enjoy rambling walks seeing remains of the French penal colony, and swim at one of the world’s most spectacular beaches - Oro Bay. Hire a car and drive into the country - just remember to stay on the right! The mountainous interior of the main island moves from tropical jungle to beef farms, with many quaint villages along the way full of authentic creperies and restaurants; work your way up to the brilliant golf course at the Sheraton Deva Spa and Golf Resort, or venture further to the east coast and take in a local rodeo.

Just visit the supermarket! In all seriousness - the French take their food, cheese and wine very seriously. Buy a baguette, basics, and a selection of cheese and wine, and live like a local. We have nothing like this in Australia, and it is spectacular. My personal favourite is Geant Casino hypermarche.

No trip to Noumea is complete without feasting on fine Pacific-inspired French cuisine at Le Roof - including those dolphins from time to time, chasing flying fish under the balcony! Duck into Bodega as you leave for a nightcap and if you’re lucky, one of Noumea’s top DJ’s Janice will be on the decks.